AVL is the world's largest independent company for the development, simulation and testing of powertrain systems. AVL FuelExact™ PLU
This system covers a wide range of different engines and modern applications. A passenger car engine test facility with more than 60 testbeds, from single-cylinder, transmission and climate to multi-cylinder engine testbeds up to 500kW, was equipped with AVL FuelExact™ PLU.

Day after day, we find ourselves surrounded by terms like calibration, adjustment, traceability, accreditation, and so forth, at times without even knowing for sure what they mean. Application engineers, for instance, calibrate their engines, but models or measuring devices are calibrated too. So what is this all about? What we would like to do is to bring some clarity and "certainty" into a matter that is all too often, sometimes even deliberately, left somewhat vague and uncertain: the world of calibration and measurement uncertainty.

Let's first take a look at the terminology. By calibration, in terms of measurement engineering, we mean the process that is needed to ascertain the deviation shown by two measuring instruments determining one and the same measured quantity. Once the deviation has been determined, it can be used to adjust an instrument, in other words, to reset it in such a way that it indicates the same value as the other one. This procedure is called adjustment.

Making an adjustment, obviously, only makes sense if you can assume that the determined deviation is reproducible and thus systematic. This means that if the calibration is repeated, the same variation is determined between the two instruments as was in the measurement run previously. What we are dealing with here is a systematic deviation or systematic error. If a systematic error shows up when multiple measurements are averaged, and if their deviations are distributed around this mean value to a certain degree, this distribution is referred to as stochastic or random error. Usually, the empirical standard deviation is used to measure such random error. 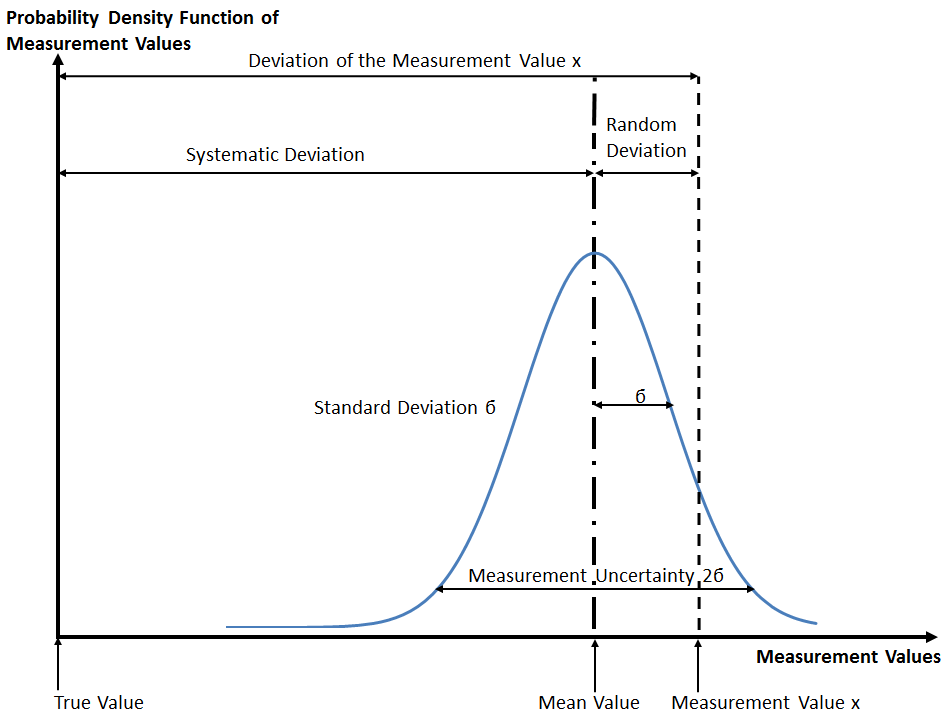 A measuring instrument is generally calibrated using what is referred to as a standard of which the deviation from the true value is known. What, however, is the true value?

The National Metrology Institutes (NMI) all over the world, for instance the NIST in the U.S., the PTB in Germany, or the BEV in Austria decided to agree on physical base standards. The primary kilogram, for example, is located in Paris, and the vibration frequency of the caesium atom is used as a time standard. In order to assure global comparability of all measurements, the NMIs compare the national standards with the international base standards on a regular basis in so-called round robin tests. In such tests, the unit-under-test's most likely deviation from the base standard is determined and stated as measurement uncertainty. At this point we have come full circle, because the measurement uncertainty will once again have a systematic and a stochastic (random) component.

In the late nineties of the last century, it was agreed to represent measurement uncertainty in the form of an interval within which the true value is expected to lie with a level of confidence of 95%. It was additionally decided to term the systematic and random components of the measurement uncertainty based on their mathematical treatment as Type A and Type B standard uncertainties.

While concepts such as accuracy, precision and similar are only quality-related, the concept of measurement uncertainty always refers to the deviation from the true value.

If you want to determine this deviation from the true value, you will need to know (for the calibration standard) how great the measurement uncertainty is in relation to the base standard. This can only be established after performing a whole chain of calibrations on standards, including the base standard, to determine the deviation and, based on that, the measurement uncertainty. This chain defines the traceability of a standard. In other words, the measured value can be traced all the way back to a base standard.

This type of traceability is required by the established quality assurance standards such as ISO 9001 for measuring instruments in production and development, and is thus the reason why measuring equipment has to be calibrated on a regular basis.

Measurement uncertainty and the evidence of traceability can now be established to the best of their knowledge by the manufacturers of measurement equipment in the form of so-called factory calibrations, or also in the context of tests in accredited laboratories.

Now what is an accredited laboratory? It is in the interests of each national state to be able to compare measurement quantities in terms of the free movement of goods. For this reason, state accreditation offices audit and "accredit" laboratories in view of their quality assurance measures and their actual measurement quality. I.e., an initial audit, followed by regular post audits, is performed to ensure that the measurement uncertainty stated by the laboratory is complied with. These audits are performed in accordance with ISO 17025. Besides such audits, the measurement quality is also checked in regular round-robin tests carried out between the laboratories.

Bio Fuels
AVL gained early experience with the application of bio fuels, such as methanol in racing or ethanol in Brazil. AVL fuel consumption measurement systems are suitable as FlexFuel designs for Otto-cycle and diesel fuels and admixtures up to 100% bio fuels.

More than 50 years of concentrated know-how in the field of fuel consumption measurement technology makes AVL the market leader in fuel measurement.