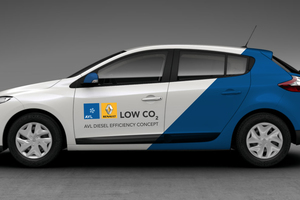 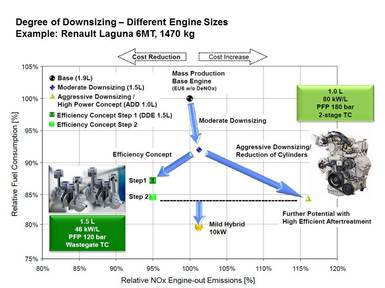 AVL has developed the so-called efficiency engine as an alternative to the familiar option of downsizing diesel engines. Because of the engine's moderate power density, its peak pressure requirements are lower in some areas than those of turbocharged gasoline engines. Consequently, its mechanical friction and fuel consumption can be significantly reduced, as the comparison with a conventional and a downsized diesel engine demonstrates.

De-rating means to maintain with somewhere bigger engine displacement, and do not go to specific power extremes (power density limited at ~ 45 kW/L), which lessens the requirement for sophisticated engine design due to lower PFP (peak firing pressure). Of course, for such de-rating concept decisions the expected production volume, costs, image, regional market aspects, etc. have to be taken into considerations.
De-rating also offers the potential of commonality between Gasoline & Diesel engine family production. The increased number of common parts with gasoline engines this leads to increased production volumes and consequently lower cost. Prototype Implementation of Efficiency Engine - Generation 1
For the efficiency engine the focus was on minimizing the frictional losses from the crank train and the parasitic losses from oil and water pumps.
The defined thermodynamic peak firing pressure for the Efficiency Concept is only 110bar (design PFP 120 bar). The gas forces are hence 30-40% lower than a typical state of the art Euro 5 Diesel engine. A careful redesign of the complete crank train according to the lower loads was performed. Significant benefits are realized in terms of reduced mass and friction.
Since the mechanical loads on the efficiency engine are comparable to a high performance turbocharged GDI engine, the concept fits well to a modular engine family line-up with common components and production facilities for diesel and petrol variants. 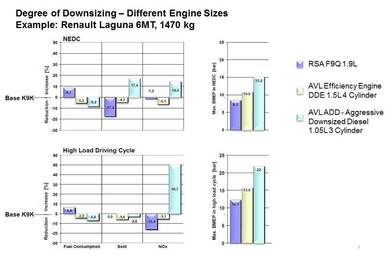 With the derating approach (efficiency engine) we also see benefits with respect to system costs and complexity. The efforts for boosting, fuel injection system and NOx aftertreatment are significantly reduced. This cost effective engine has the potential for highest production figures due to worldwide market chances, thus offering additional benefits in the cost structure.
The development is clearly shooting for more independent systems providing attractive reduction potential in an extended operation area. The biggest challenges at the moment are the system costs and further increased complexity. The efficiency / de-rating concept currently offers an attractive solution for the cost sensitive high volume market combining improved fuel economy with system simplification and potential cost reduction.