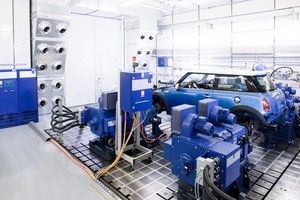 Vehicle in the Loop Test System

The increasing complexity of modern powertrains is placing increasing demands on System Integration in an early development stage. Development engineers need Test Systems to test powertrains and vehicles in a virtual environment without having vehicle tests. System Integration in the virtual environment has to consider typical functional aspects from road tests where system operation

The success of testing modern and complex powertrains is clearly determined by the interactions of mechanical components, electrical components, and Control Units and Control strategies. These interactions can only be figured out during virtual driving maneuvers. A virtual vehicle-driver-road-infrastructure-traffic environment system generates real-world testing loads to the powertrain. This testing-method is known as "maneuver based testing". AVL's Vehicle in the Loop Test System involves two major modules:

Testing powertrains only is for sure also possible on AVL's Vehicle in the Loop Test System.